The Spa Bathhouse and Hotel was designed in 1955, a collaboration by noted modern architects William Cody, Donald Wexler, Richard Harrison and Phillip Koenig. One of the most striking features of the building’s design was its graceful, concrete-domed colonnade which lead visitors diagonally to the Bathhouse.

The Agua Caliente Band of Cahuilla Indians who own the property, announced plans to demolish the Spa Bathhouse and Hotel in its entirety and PS ModCom established a dialog and presented a case for restoration instead. In the midst of these discussions the Tribe demolished the buildings in June 2014. 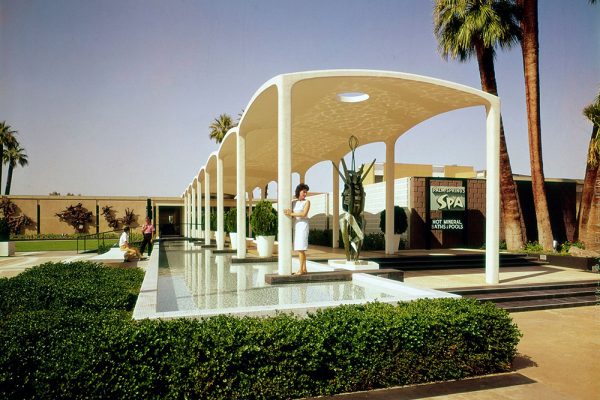 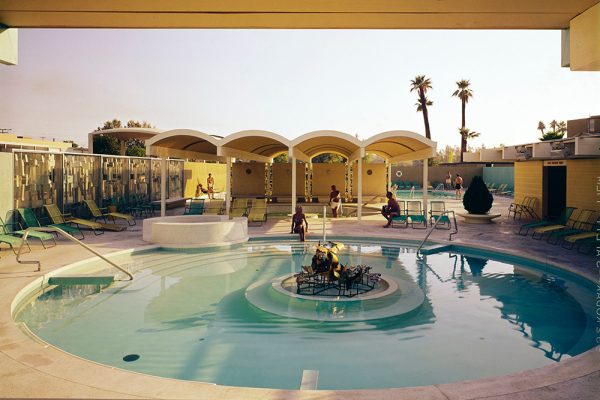 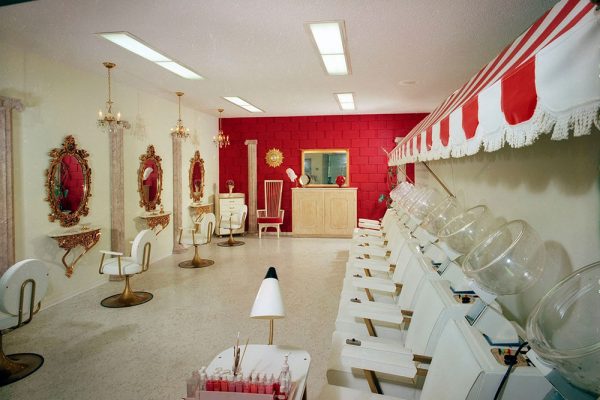 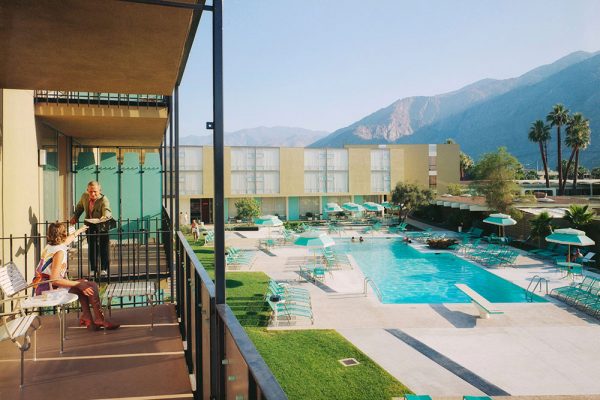 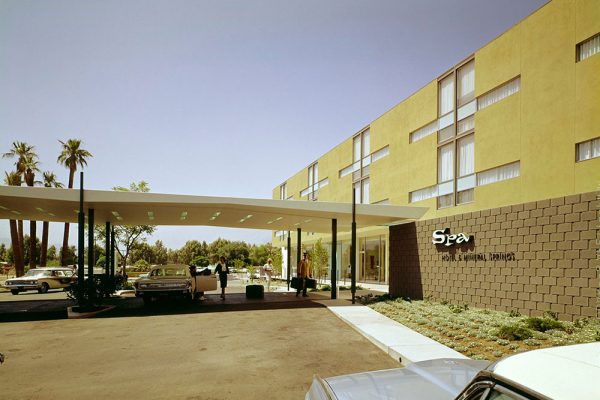 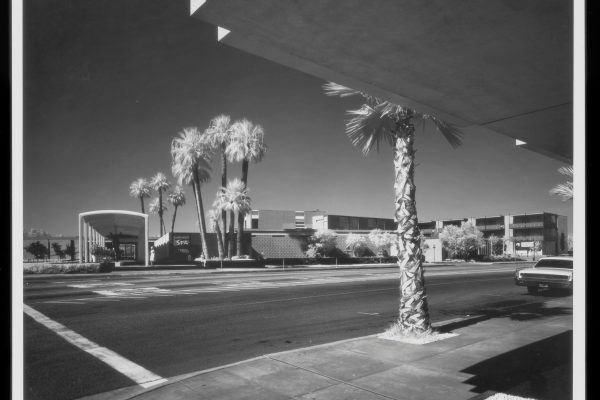 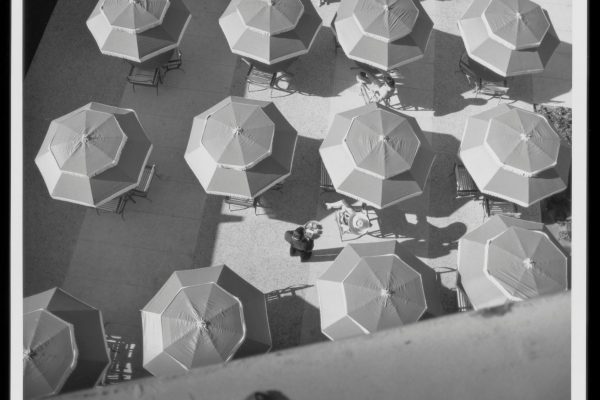 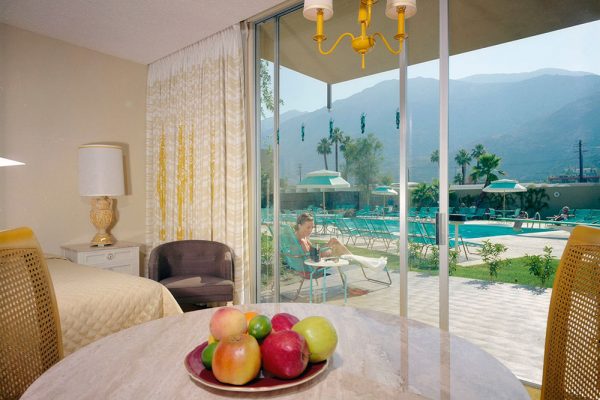 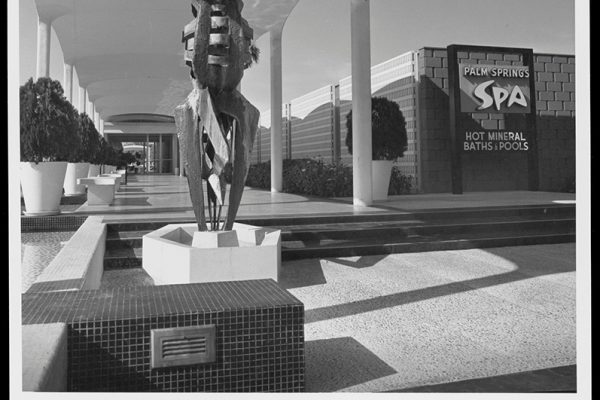 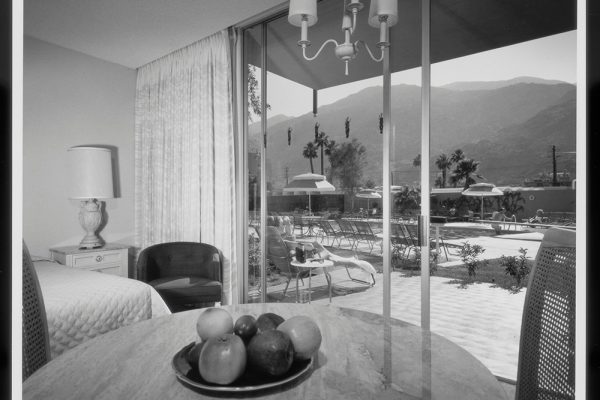 Despite extensive testimony and effort by the preservation community, the Palm Springs Unified School District (PSUSD) voted to demolish its modern Administration Building designed in 1957 by the renowned local architectural firm of Wexler & Harrison for a performing arts building. In addition, the funding for the new building was approved by the California State Allocation Board.

The Administration Building was a fine example of mid-century modern design with few alterations. Its demolition versus implementing an adaptive reuse as a portion of a performing arts building is tragic and disturbing. 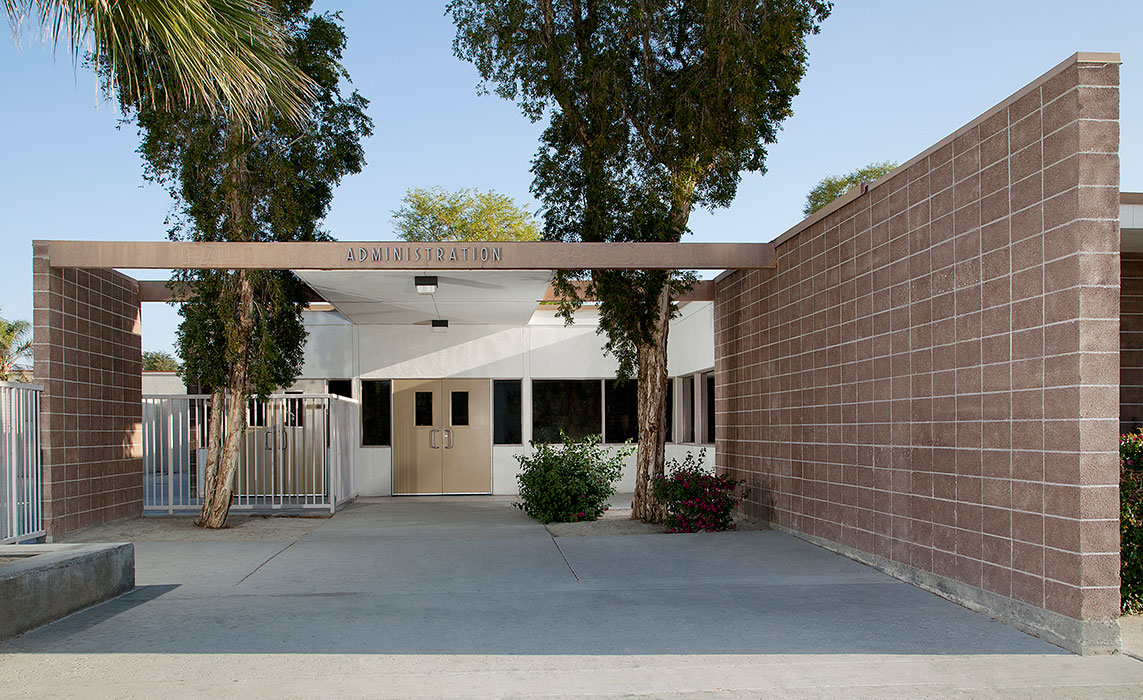 On February 7, 2013 the Rancho Mirage City Council denied the Palm Springs Modern Committee’s appeal of the City’s order to demolish the Chart House restaurant, which had been damaged by fire in January 2012. Owner John Wessman subsequently bulldozed the Chart House taking away one of the Valley’s most iconic architectural buildings. This, despite the fact that the independent historic consultant hired by the City found the designated landmark to retain its historic significance even after the fire.

Erected in 1978, the Chart House was a one-of-a-kind sculptural building designed by a master of organic modern architecture, Kendrick Bangs Kellogg.

Through the course of 2012, PS ModCom’s attorney Amy Minteer provided the City with a series of detailed letters outlining our position and citing relevant case law. We argued that for the Chart House to be demolished, California law requires the construction of a new building replicating the original design, incorporating salvaged architectural materials. The City Attorney flatly rejected this argument, persuading the Council to approve demolition instead.

Supporting our position was the Palm Springs Preservation Foundation and many members of the community who testified or wrote on behalf of the Chart House.

Unfortunately, it was our attorney’s opinion that due to the current condition of the building and various interpretations of relevant case law, pursuing litigation would be problematic at best. After careful deliberation the Palm Springs Modern Committee’s board could not justify the tremendous time and expense that would be required to fight this decision when our chance of prevailing before a judge would be relatively poor.

We believe that we can honestly say that the preservation community fought the good fight and lost. 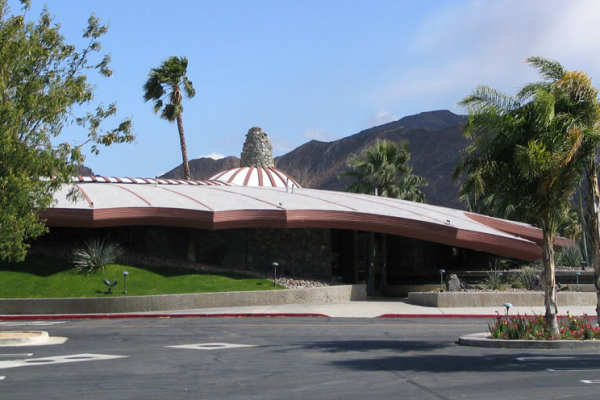 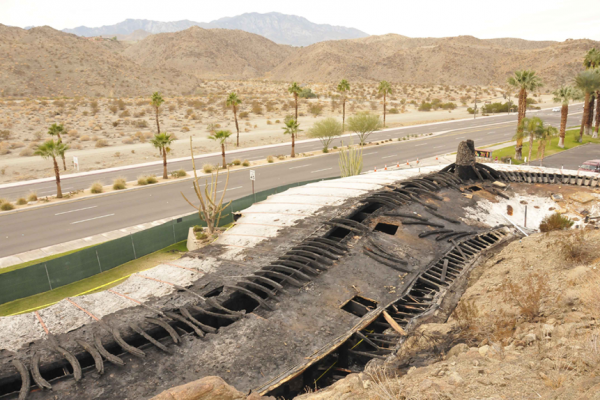 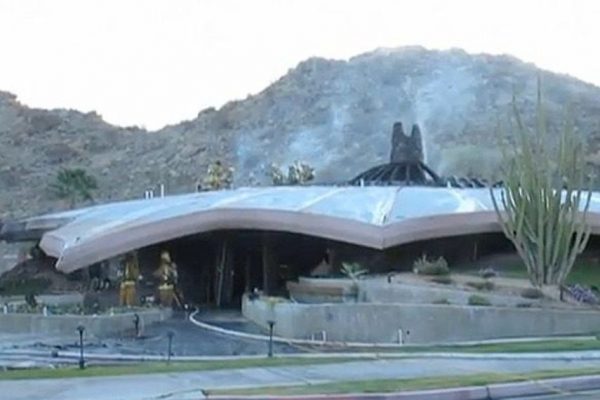 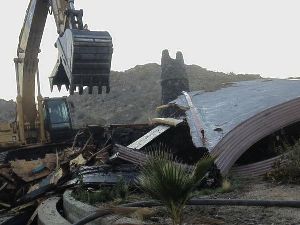 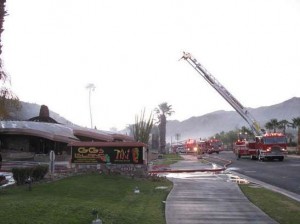 In 2002, during escrow of Richard Neutra’s 1962 Maslon House in Rancho Mirage we heard rumors of possibly serious modifications to the residence. Within days of escrow’s close, a demolition permit had been applied for and approved by the City of Rancho Mirage and the Maslon House completely razed. In our frustration and outrage, Modcommers organized a worldwide publicity effort with three aims:

2) Encourage cities to adopt preservation ordinances and conduct thorough, professionally-prepared historic resources surveys in establishing the significance of a property before demolition permits are issued

3) Serve as a warning that owners of historic properties will no longer be able to assume apathy on the part of preservationists but, instead, be inundated with unfavorable local or national publicity instead. The Palm Springs Modern Committee’s success at gaining national publicity about the Maslon House demolition should assist others in their preservation efforts by serving as an example of what happens when cities are complacent about identifying and designating their historic resources. 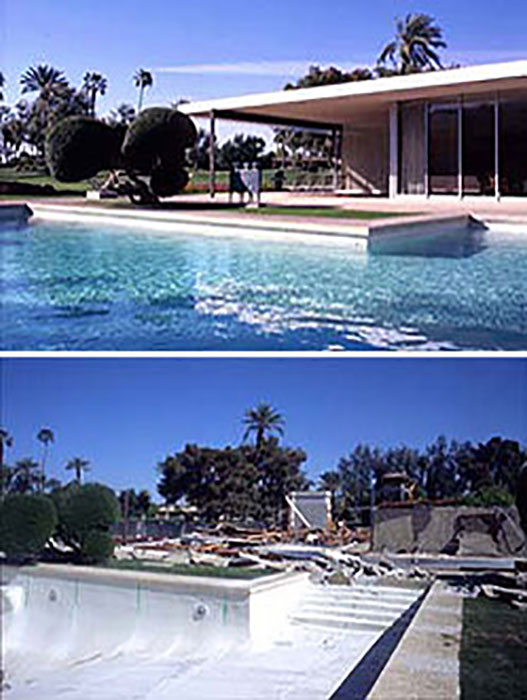 Once again the City of Palm Springs has had little regard for the City’s architectural history and stood by and let an important landmark be destroyed. The Biltmore Hotel designed by architect Fred Monhoff in 1948 and the last remaining grand hotel in Palm Springs went under the bulldozer last week.

In a flagrant violation of California State Law, the City allowed Nexus Properties, who recently purchased the Biltmore in bankruptcy court, to start demolition without so much as a permit to do so. The City claims that an abatement order issued in 2001 that required the then current owner to take action to resolve issues of neglect and vandalism was enough to allow the demolition even though the abatement specifically stated that a permit must be filed before any construction or demolition occurred.

The California State law that the City violated, specifically the California Environmental Quality Act (CEQA), requires that historic structures must have an Environmental Impact Report (EIR) prepared prior to issuing a permit for renovation or demolition — this was not done. The EIR specifically requires that alternatives to demolition be considered, including rehabilitation and/or adaptive reuse.

The Biltmore Hotel was a well-known historic site, having been featured in several books on mid –century architecture including “Palm Springs Weekend;” a book that chronicles the unique mid-century modern architecture that has made Palm Springs famous. The Biltmore was also listed in the Riverside County Historic Resources Survey prepared in the 1980s and more recently in a 2001 Palm Springs Historic Structures Inventory. So claims by certain City officials that “they did not know” that the Biltmore was of significant stature architecturally are totally absurd.

The simple truth is that the City should have required an EIR prior to allowing demolition to go forward. Despite the fact that the building had been sorely neglected and vandalized, the abatement order did not require demolition. Given the new ownership, the City should have insisted that alternatives to demolition be considered. In fact, a recent plan for the site presented by Nexus included 19 single-family homes — there were 18 bungalows on the Biltmore site that could have been easily converted to residential units.

Desert modern architecture has been enjoying quite a bit of popularity lately. According to architectural historians, Palm Springs boasts one of the highest concentrations of mid-century architecture in the nation.

The Palm Springs Desert Museum recently mounted exhibitions on E. Stewart Williams (who designed the museum and many other significant properties in the Coachella Valley) and Julius Shulman, an architectural photographer who has been documenting modern architecture for over 50 years. The shows received an incredible response and were testament to the importance architecture has played in the development of Palm Springs as a City.

Is it prudent to methodically destroy our historic sites in exchange for awful architecture or worse yet vacant lots? Thank goodness that Fire Station #1 and the Tramway Gas Station designed by well-known architect Albert Frey were saved at the last minute from the wrecking ball. Ironically, the Tramway Gas Station is the proud new location for the Palm Springs Visitor’s Center.

City officials just don’t seem to understand that by letting historic buildings be demolished without following the law, they are encouraging the loss, bit by bit, building by building, of the historic character of Palm Springs. The City’s shortsightedness in favor of development that is not sensitive to Palm Springs architectural history is destroying the uniqueness and character that has stoked the resurgence of interest in Palm Springs, and increased property values for many valley residents. Just ask any real estate agent. We have watched the prices of mid-century modern homes practically double in the last two years.

Our historic properties are a resource that if preserved will not only enhance the quality of life for generations to come but will generate increased revenues as well. The City should consider utilizing these significant resources to promote Palm Springs and capitalize on the unique architecture that exists here. Cities such as Miami Beach have done just that. The Art Deco enclave that was once rundown and derelict has been converted to some of the most valuable real estate on the East Coast. Other cities like Santa Barbara, Pasadena and San Francisco have created landmark districts and enacted policies that preserve their City’s historical fiber and become destinations for tourists, businesses and residents alike.

Once they are torn down we can never bring these buildings back. Our unique architecture is special and historically significant, without it Palm Springs would not be Palm Springs. 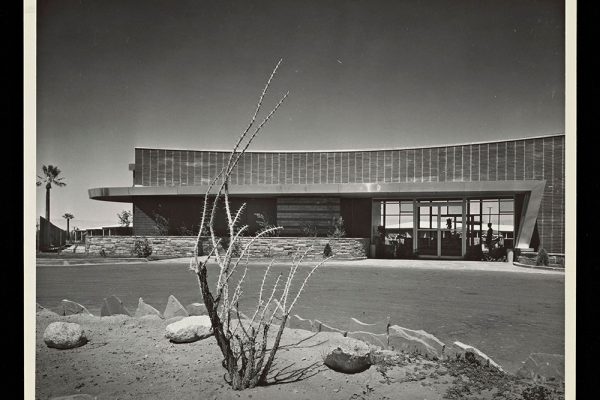 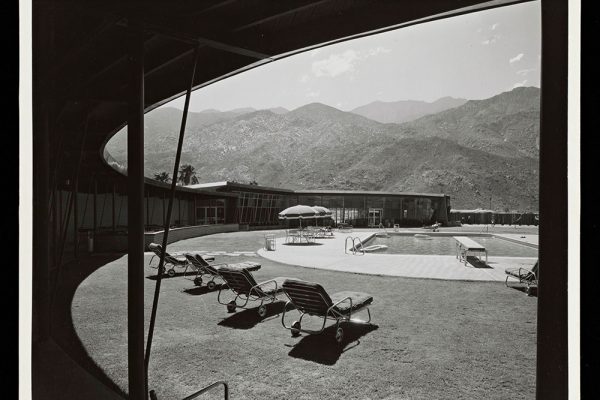